skip to main | skip to sidebar

There were these fellows, brave stalwarts in the service of their duty, their honor, and their country. After their own Fourth Of July, let's pretend... it's now just some eight weeks later, September 12th, 1952... are you with me?

Walk with these men. Stanger steps are seldom taken.

Fading in...you're a flight officer in the nascent Air Forces of the United States in 1952. This writer was four, then. You've been assigned to an airbase on the near-deserted azured green and frothy white coast of panhandle Florida. You are trained and educated to be part of the pool from which would later be drawn moon-walking astronauts. You're not arrogant, only appropriately confident; see, with few contenders of this Earth? You and your brothers would compete in an aspiration to rule Earth's skies. See links to the torrid tale at the conclusion of this piece.

As fate was determined, you go, and oddly, missing in action. It's ostensibly a "training mission," but it's the combat aviator understanding the difference between flying in training and then flying in combat.

The only difference is the but slight increase of stuff in the air to hit... canopy breached, hot metal flashing through the plexiglass faceplate of your helmet and taking out a side of your face—churning your brain in the bucket of your headgear and then flopping down over your good eye. It happens in training. As it turns out, the evidence would point to you flying into some alternative training, Special High-Intensity Training, seriously strange and more terrifying, even, than that encounter with shrapnel or an enemy for which one is trained.

Big sky, little bullets, remember, but then there is the unknown unknown really filling the void of one's unspeakable imagined loathing! See, you had never trained for what it looks like you were sent out to face.


Ultimately, your folks get the dreaded telegram, the well-known horror of the gold-star family. Notification that their son or daughter was missing and in dire straights or dead. There can be literally no amount of gold stars making the slightest difference... then add never getting a hint of the truth, your memory for them having been the dead guy blamed for his own misfortune and needless demise.  An errant pilot, erring. 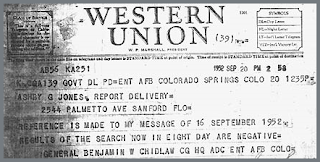 All hopes, then, are coal to a mourning Newcastle... your folk's misery, abject. and then they hear from a man in support of the responsible for what has all the appearances of an Air Force cover-up... 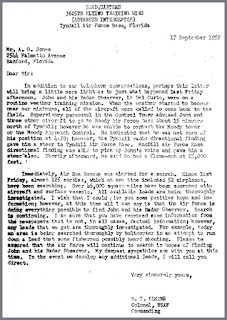 There would be a small stone, quickly forgotten and overgrown. Beneath it lay forgotten dreams... and a sacrifice which has been demeaned. 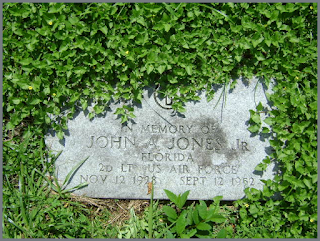 After the Air Force had washed their hands of him and later on even denying his very existence to Field Investigator Frank Feschino (in two separate inquiries to different agencies trying to get to the bottom of the strange affair), he found the grave and family of Lieutenant Jones. 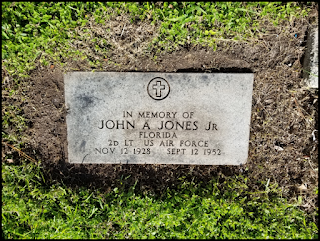 Later on, and after many years, Feschino would return to the grave site and plant a few flags for 2018's fourth. He would have to give the plot a spruce up and brush time's detritus from the engravings...  remembering. Respecting. 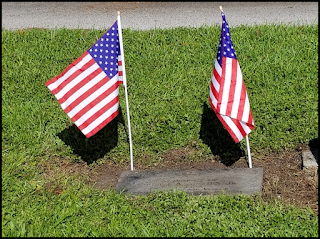 Here lay not the man, one is reminded. His bones, aircraft, and radar operator were never recovered or seen again. He is but a memory wrongly remembered and dishonored for the convenience of suspicious secret keepers. This writer says true. 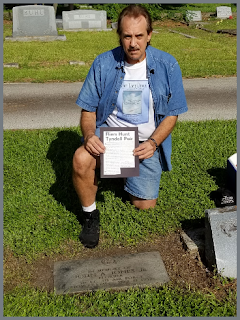 Frank C. Feschino Jr. would pose plot-side with a Newspaper article chronicling the 1952 affair. This affair would give even retiring Stanton Friedman pause, among significant others. Friedman would provide Feschino support, assist in the investigation, and write the fore an afts of all Feschino's books.

One wonders why one couldn't be moved to call this an endorsement as close to a death-bed confession as respect and "an appropriate" allows, forgetting... live long and prosper Mr. Friedman! My point is that a guy with an unargued reputation is all in on the premise. Stepping down now as rather undefeated champion, seems he'd be more careful with a respected legacy... unless...

Regardless, Friedman would agree, I believe, pointing out the supremacy of data... unspun, it's truth.  That should mean something.

Seriously? Full-on air to air combat? An undeclared and secret air war with ET? ...Endeavoring not to presuppose, the perspicacious follow data for its leadership, it's shown.

Part I of VI
https://alienviewgroup.blogspot.com/2017/08/our-heroes-betrayed-part-i-of-iv.html


Thinking you know, and knowing not, but pretending you know not when you do know are likely equally egregious, societally toxic, and just no way for sentient humans to live their lives.